back in 1974, when a group of Christians from Celt Street Evangelical Church in the centre of Inverness began a Wednesday-evening Good News Club for children in Holm School.

In 1980, Christian youth group Covenanters, Junior Covenanters (Jucos) and Adventurers began to meet on Sunday afternoons at Holm School, and on Monday evenings for games and crafts. During these early years, some of the older children were also taken to Sunday evening services. To broaden their work in the local community, they decided in 1982 to hold adult services in addition, and founded Holm Evangelical Church on Sunday, 24th October 1982.

Initially, there were just 12 members. They met at what was known as Holm Evangelical Church at Torbreck Christian Centre, in premises which had formerly been an architect’s home and studio. When it came on the market, the founders of the church offered what they could afford, even though this was substantially less than the asking price. Greatly to the surprise of the solicitor acting for the sellers, the offer was accepted. ‘We felt that the Lord’s hand was on the process,’ someone recalls. They were further encouraged to discover that the previous owner’s mother-in-law had drawn his attention to a verse from Haggai when he and his wife moved in. The members of the new church took these words as a promise to themselves. 'The glory of this present house will be greater than the glory of the former house,' says the LORD Almighty. 'And in this place I will grant peace,' declares the LORD Almighty.’

From the beginning, Holm Evangelical Church aimed to be, in the words of an early minute ‘a broad-based fellowship with an emphasis on the family, evangelism, teaching and community involvement.’ The leaders gratefully received help and advice from Christian ‘elder statesmen’ Allan Redpath from Edinburgh and Stanley Collins from Carlisle. One says ‘They were men of God who saw the vision we had and encouraged us without pushing us further than we could cope.’

Initially, Holm church had no pastor. The Sunday Services were taken by members of the fellowship or by visiting preachers, and all the work was done by the elders and members. The 1986 AGM minute shows that already Church work was settling in to a familiar pattern. There was a Bible Class, Men’s and women’s Bible study groups, a Monday evening games night, a mother and toddler group, and something called ‘Holm Chat.’ By then there were 54 members. A Friday night Youth Club also met at the Centre. The leaders of this faced all the usual challenges – ‘bottles and couples in corners’ someone recalls. But some of the 15 to 20 young people who attended are still connected with the church, including Alison McBean (now Mackenzie) and Jane Aherne (who met her husband Tim Griffin at the Club).

It was reckoned that through the various activities the church had links with 130 families on a weekly basis. By 1989, there was a serious space problem at the Torbreck Christian Centre, Around 100 people could be shoe-horned into the studio, but as the numbers attending the family service increased, space became inadequate. As the minute has it ‘James Campbell outlined the option of purchasing for some £3000 six units [from the Kishorn oil yard] which joined together would provide a meeting room double the size of the present church. A further £3000 approximately would be required to decorate these units, a figure which could be reduced by in-house labour.’ Enter the portacabin, opened on 17th December 1989, when the membership stood at just over 60.

The church had, since its formation, been an evangelical church independent of any body of churches, but in 1990, realising the benefits of being part of a larger body in terms of fellowship, support, and recognition in the community as being a ‘mainstream’ church, decided to affiliate to the Baptist Union of Scotland, and gratefully received the help of Peter Barber and Eric Watson from the Union in making this transition, Originally it had been intended to further develop the site at Torbreck, but plans to acquire additional land there were blocked, and by 1993 it was clear that relocation was crucial if the work of the church was to continue to grow.

Move to the Culduthel Farm site

Leaders began looking at the Culduthel Farm site in 1993, with a growing vision for ‘a Christian Campus with the church as a focal point.’ The name Culduthel Christian Centre first occurs in the minute of a members meeting held on 22 June 1994. In April 1995, planning consent was approved, and the Press and Journal reported that it was hoped to have a new church and conference centre erected on the site by 1997. It took a little longer than that!

Verbal agreement to buy the site was reached early in 1996, but there were to be 5 attempts before missives were agreed. Between the agreement to purchase Culduthel Farm and the final documents being signed, the old house on the site, which it had been intended to refurbish extensively for use as a church house, was destroyed by fire. To replace it, a brand-new church house was erected in 1997. The portacabin was slung over the roof of the Torbreck property in two sections, and transported to Culduthel, James Campbell began a report to a members’ meeting in the church house on 12th November 1997 ‘I am pleased to be able at last to say “We’re here!”’

In the local community, across the country and across the world there are many people who had links with the church in its early days. Allan Dunbar says ‘We were able to be a caring family fellowship to many people. It’s lovely to see folk coming back on holiday and saying “Thanks!” for all the help they received in past years, saying “I’ll never forget my days in Torbreck”.’

Policies were adopted, re-emphasising the need to reach out into the local community and beyond with the Christian good news, and to express the love of God through social action. People were encouraged to share their faith both in their everyday environments and through involvement in short-term mission at home and abroad with agencies including Youth for Christ and Blythswood Care. The church began working with social agencies such as Inverness New Start and, more recently, the Highland Food Bank. A close, mutually-supportive partnership was forged with an Evangelical Church in Sliven, Bulgaria. There was significant numerical growth. Numbers attending the morning service had risen from an average of 70 to around 200. There was also undoubtedly spiritual growth, though this is harder to quantify. It is important to acknowledge that there have been times when the way ahead has not always been clear. 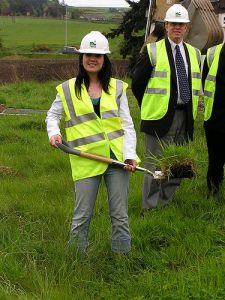 Plans for the new Culduthel Christian Centre building were developed and implemented following rigorous consultation with those who would use it on a daily basis. In a parallel process of planning and growth led ultimately, we believe, by God himself, the living, spiritual community which meets on this site also flourished.

Recently, we have experienced a fresh touch from God as a congregation and as individuals, and we are so grateful to him.’ One of the founding elders of the church, Norman Cordiner, reflecting on the past 25 years, commented that,

‘A quarter of a century ago those who began the work had a very real conviction that the Lord’s hand was on this new venture. But no one then had any idea of God’s timing, and that this new centre would be opening today amidst such amazing development and growth. The sense of the Lord’s providence in all of this is quite awesome.’